Oceanside High School’s Julianna Wilson was named to the All-Avocado League East second-team in a vote by the league coaches earlier this month. Wilson, an outside hitter, was one of the top point producers for the Pirates, who advanced to the CIF-San Diego Section Division III playoffs. 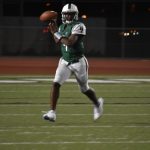 After scoring nearly 30 points per game, Oceanside High’s offense dominated the Avocado League and it was rewarded after the league coaches made their postseason selections for the Avocado League, which was the toughest league in San Diego during the 2018 season. Quarterback Kyrin Beachem, running back Kavika Tua, and receiver Dylan York were 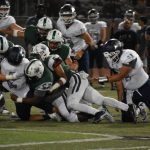 Oceanside High School used its brilliant offense and opportunistic defense to advance to the CIF-San Diego Section quarterfinals before losing to No. 2-seeded Eastlake, 30-7. The Pirates took an early 7-0 lead against the Titans, thanks to a fumble recovery on a botched punt that was recovered in the end zone by sophomore Eric Russell.

Welcome to the new home of the Oceanside Pirates Athletics! Check back soon for updates and Go Pirates!